I called Mom at 5:55 p.m. just to check in. No answer. I called again at 6:15 and she answered. I think she was probably napping earlier because when she answered she said she was going to get dressed for her doctor’s appointment. So I mentioned that it was 6:15 at night…not morning.

“Well, it’s so dark outside,” she said. “That’s because it’s night time, Mom. See, you have the whole evening to relax.”

The appointment she thinks she has with her female doctor, Dr. S., isn’t until January. Mom thinks it’s sooner, even though the date and time are written on the calendar. She doesn’t have any appointment until Dec. 15 and that’s with Dr. D…who has never responded to my confidential written requests to have Mom referred for a cognitive assessment.

I slumped into a major depressive mode today. I feel as though I’m trying to trudge through wet cement and getting nowhere. It’s difficult being 400 miles from my folks. At least Dad is safe and doing ok in the facility. Mom does okay with her everyday routine, but she is also unraveling with confusion when it comes to days, appointments, banks, etc.

All of this could be much more manageable if they lived closer to me.
One could also say, it might be better if I moved closer to them, but I cannot live with her. I also cannot afford rent in that area…plus being there would mean being far away from friends and family and the life/identity I have here in MO.

Admittedly, I struggle with guilt…anger…depression…resentment. I look too deeply into my relationship with my Mom…memories from the past…incidents of the present. I very much envy people who have close and loving relationships with their parents. I never had that.

I am so sorry that the wounds from her own childhood still haunt her. In her mind, nobody loves her, she has to figure out what to do by herself, and no one is to be trusted.

Every time my cell phone rings, I have an adverse physical reaction. I expect it to be Mom with some confused idea I’ll need to re-explain—again and again and again. But I’m all she has besides Dad…so that’s what I do.

Maybe we’ll see some sunshine tomorrow and I can refrain from taking refuge in bed all day.

Mom left a voice mail message: “We don’t have any money at Merit Bank. It’s all gone.” I called her back and reminded her that we closed the account at Merit Bank in March because it was too confusing to deal with three banks. We took those funds and opened a money market account at First Midwest and we use that to pay for Dad’s care.

“My mind isn’t working right. I don’t remember things from March.”
I assured her that if she needs to cash a check, she can to go First Midwest Bank or Bank of America. They know her there and she has accounts with each.

I’m not sure she’ll remember…because last month she went to First Merit and opened up a new checking account because she needed to cash a check. There is no money in that account…so we should probably close it officially. For some reason her mind remembers that bank more than the others we’ve been using regularly.

I encouraged her to write a note to herself with the names of the two banks she should go to in order to cash a check…and to put it on the refrigerator.

Mom called to announce, as she has done before, that she wants to have her own checking account. And as I have done many times before, I told her she has one that is just for her.

“Well, where is it?” she demanded.

“Usually you put the bank books in the lower left drawer of your dresser,” I reminded her.

“Just a minute,” she said. I could hear her rummaging around. “Well, it’s not there. Nobody believes me, but someone does come in and move things around.”

“Try the upper right drawer, Mom,” I suggested. Sometimes you put things there.

“Well, it has a gray cover and a note taped on it: Mom’s Checking.”

“What about your purse, Mom? Maybe it’s in there.”

“No it’s not.” Then she took everything out of the purse and found it. “Oh. Here it is.”

She stayed on the line and talked about how unhappy she is…how she doesn’t know how long she can keep this up…driving every day to see Dad. During today’s visit he didn’t even speak to her.

I tried to acknowledge her feelings and also mentioned that it’s ok to take a day off now and then…to stay home and do what she wants to do.

“Well, I might do just that. I’m tired of sitting around looking at these four walls. Maybe I should sell the place. I don’t know what to do. I have to figure out what to do. All I do is feeling like a slave – go there, pick up his dirty clothes, wash and iron them, bring them back. And he hasn’t given me a Christmas present in years…even when he was home.”

The conversation went on like that. She feels unappreciated, but on one level she does understand that he cannot remember to say thank you or to buy her a card or a gift.

“At least he still knows who I am,” she said. 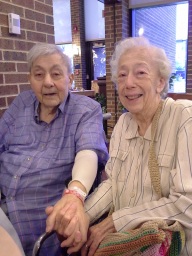 Just another voice in the wilderness from someone who's lived on this planet for over 70 years and faces permanent residency on Planet Elderly. Update: As of March 2, 2017, I turned 70. I'm now an official resident of Planet Elderly. Dad passed away September 22, 2016. In late March 2017 I was able to move Mom closer to me where she resided at a memory care assisted living community until being downsized to a skilled nursing senior community in October 2018 in Columbia, Missouri. I view the Parental Journal entries as part therapy, part family history, sort of a case study of our family's journey with dementia. It's quite an adventure. Recommended readings for others who have loved ones who live with some form of dementia: The 36-Hour Day; the website: https://www.agingcare.com/ ; https://www.alz.org/
View all posts by jjmummert →
This entry was posted in Parental Journal, Uncategorized and tagged cognitive assessment, confusion, depression, mental decline, planet elderly, short-term memory loss. Bookmark the permalink.