I’ve been here since late Saturday afternoon and the most exciting thing that’s happened is me having to go to an “urgent care” facility to been seen for a rash that would not go away by itself with topical gels.  Mom got a big kick about having to go with ME to get medical care.

I googled “urgent care in Lake County, Illinois,” and learned that the hospital my folks have been associated with has opened some “emergency care” facilities.  Scheduled a 3 p.m. appointment for yesterday, walked in at 2:45 and was seen “immediately.”  They weren’t too busy with walk-ins.  Scheduled folks get priority.  During intake time, I could tell it was a lively group.  I felt like I was on the set of “Nurse Jackie” what with all the kidding and camaraderie.  It was fun…and I got my script for Prednisone.  Amen.

Mom is dealing with a lot because she admits that she has to decide “what to do” concerning the future.  So she’s been thinking about that often…for at least a year.  It’s a tough subject to think about and I fully understand that.

My long term strategy has been to support Mom by coming up every 5 weeks or so and helping out with paperwork and whatever else.  I thought that maybe by seeing how helpful I can be, she might consider eventually moving down to Missouri.  During this visit, she is the one bringing up the subject.

Today we talked about options again:

For a while today she was ready to get in the car and tour Lenoir Woods.  Ten minutes later she was saying, “I think I should wait a year to see how Dad does.”

Some folks might get frustrated with a parent going back and forth, unable to decide what to do.  Personally, I’m thrilled that we can sit and discuss options calmly and that the idea of eventually moving to Columbia is a viable option for her.  She sees the advantages it would hold for all of us.  Then, again, she thinks such a change for Dad might be difficult because he is doing well with the people and routine where he is now.  That’s a valid concern.

And, of course, the idea of sorting through things and relocating is a HUGE task for her.  I assured her that if she decides to relocate, things can be done in steps and there are professionals who can assist.

I think that as long as Dad is alive, she will probably keep things as they are.  She puts him first—always.  “I’m glad you’re here,” she said today, “but you have to know that Dad is my main concern.”     “Yeah,” I replied, “and you are my main concern.”  Then we chuckled. 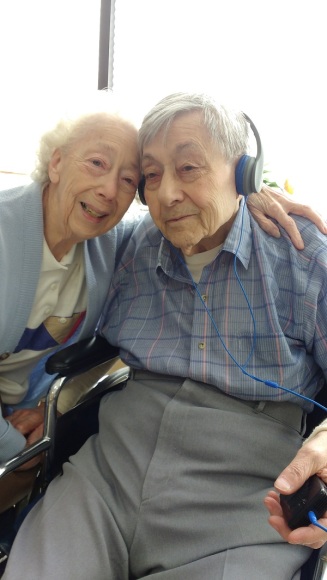 I’m keeping things casual and easy going.  Not forcing issues or decisions.  Lots of active listening.  I also talk about how families are advised to make their own plans and decisions before the medical or legal community forces change to happen.

Mom knows that her episode of confusion and going to a neighbor’s house at 5:30 in the morning, which resulted in me getting a call from the Grayslake Police Department was a major event of concern.  She does not deny that it happened, and I think it scared her as much as it concerned me.  “But I’ve been fine for a few days now.  That won’t happen again.  It only happened that once,” she said earlier today.   “Yes, things are fine today, but if it happens again, then we will need to make some changes,” I replied.   She did not reply to that statement.

I found Mom on the floor organizing pots and pans Monday evening.  When I dry dishes or pots I leave them for her to put away because she claims she can’t find anything when I’m there.  (right…blame the daughter).  Anyway, she pulled out a double boiler pot.  “You want this?” she asked.  “I won’t need it anymore.”

“Sure,” I said.  “I’ll take an early inheritance of a double boiler.  Thanks!”

It’s nice to return to visit Dad and his neighbors in the Sunshine Wing.  Not much changes.  A few people exit out of the unit and transition into a Medicaid funded room when personal funds run out…a few pass away…a few new folks move in.

Dad is doing pretty well.  He recognizes Mom, but isn’t sure about me…although I am familiar to him.  He ALWAYS has a smile for me.  When he wears some hearing assistance, he can more easily respond to questions and comment on things going on around him.  He can’t always finish his thoughts…or they ramble a bit here and there…but we just go with the flow and follow his lead.

Wanda turned 101 last month.  She seems to be harder of hearing.  I walked over to say hello to her.  She had problems hearing me so I leaned closer to her.  “Oh!” she said.  “You have such beautiful hair!” and she stroked and petted my hair.

Wanda would be awesome at a casino craps table somewhere.  She was engaged with the therapist throwing dice and really got into it…closely looking at the dice…moving them in numerical order…counting them.  It was nice to see her so engaged.   Then the therapist bounced a large ball to her.  She caught it and firmly bounced it back…with much vigor.  This went on for about five minutes; then she decided it was “too hard.”  She was probably a badass at volleyball.

Then the therapist turned to my dad and showed him the ball.  “Oh…no…no thank you,” he said, but she bounced it to him anyway, he caught it, and he bounced it back to her a few times.  Her name is Doreen and she told us that sometimes he enjoys reading and participates in sing along time.

Dad is one of the more verbal residents and always says, “Thank you” for anything anyone does for him.  All the nurses and staff members like him and enjoy his sometimes funny comments.

He also has his difficult times when he becomes agitated and yells.  He has to be given medicine to calm him down.  This often happens late night.  More recently, he’s been yelling that he wants to go home.  Wanda yells the same thing once in a while.   I would, too.

Next Thursday Mom has her annual exam with her new primary care physician.  We went for the blood work Monday.  Dr. Gupta will receive the results before the appointment.  She is aware of some short-term memory loss issues with Mom because she witnessed them in February when we had a brief visit to introduce Mom to her new doctor.  I have written another letter to Dr. Gupta requesting additional testing to assess the cause Mom’s confusion and short-term memory loss.  I hope that happens.

Meanwhile…this visit is off to a calm start.   These days are golden, and I’m grateful.

Just another voice in the wilderness from someone who's lived on this planet for over 70 years and faces permanent residency on Planet Elderly. Update: As of March 2, 2017, I turned 70. I'm now an official resident of Planet Elderly. Dad passed away September 22, 2016. In late March 2017 I was able to move Mom closer to me where she resided at a memory care assisted living community until being downsized to a skilled nursing senior community in October 2018 in Columbia, Missouri. I view the Parental Journal entries as part therapy, part family history, sort of a case study of our family's journey with dementia. It's quite an adventure. Recommended readings for others who have loved ones who live with some form of dementia: The 36-Hour Day; the website: https://www.agingcare.com/ ; https://www.alz.org/
View all posts by jjmummert →
This entry was posted in Parental Journal, Uncategorized and tagged Alzheimer's, confusion, dementia, elder care, elderly parents, forgetfulness, Lenoir Woods, long-term care, parental confusion, planet elderly, short-term memory loss. Bookmark the permalink.