I visit almost every day…mid-morning.  Some folks wonder why, but I enjoy being part of Mom’s community.  I’m probably still dealing with a bit of guilt for changing Mom’s life so dramatically when I moved her down here to Columbia.  On the other hand, we always agreed that we would enjoy living in the same community, but not with each other because we would drive each other nuts.  She still shakes her head in agreement when I mention this. 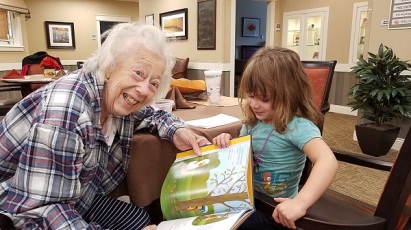 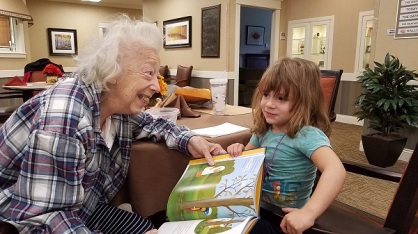 Mom seems to like multiples.  For some reason, she puts on two pairs of nylon knee hi stockings.  I check regularly, and if I see what is probably multiple pairs, I just ask if she wants them on.  “No…I don’t know why I do that,” is often her reply.  So I help remove them and discard those with holes.

Tops are another multiple favorite and a shared fashion statement with others at times.  It’s not unusual for Mom to have on 3 or 4 tops.  “I like to be warm,” she would say when I asked.  I don’t ask anymore.  In fact, I marvel at the variety…shirts, blouses, and tee shirts I’ve never seen before.  They’re probably “borrowed” or “found.”

“Well, that’s a nice purple tee shirt you have on, Mom.  And it has a pocket.  Kind of looks like a man’s shirt.”

I’m quite sure not all of Mom’s things have her name on them.  I should do an inventory and apply the black marker with the word “Pearl” where needed.

Only one time did I see her wearing multiple slacks.   She had on a pair of her own and over those she had on a  pair of very large beige colored culottes, shorter than her pair.  I admit I stopped dead in my tracks and decided I would address this.

“Oh…it looks like you have two pairs of slacks on.  Are you chilly?  Do you want to wear two pair?”   If she said yes, that would have been the end of the conversation, but she looked perplexed.

About those three bras….

Mom has dry skin and problems with bouts of itching.  We have all kinds of creams and the doctor even said to try Claritin which, it turns out, made her itch even more.

One day she was trying to scratch her shoulders and back.  I suggested we go to her room and put some itch cream on her skin.  She agreed.

When Mom began removing her three tops, I saw that she was sporting three bras.  Well, two and a half, really.  She had two on and the third was fastened around her waist but not yet hoisted up.

My reaction was a mixture of surprise and sadness.  It looked funny, but I felt so sad that she struggles with getting dressed…and what is it about her dying brain that has her wearing multiples…including bras?  I didn’t laugh.  I tried to be matter-of-fact.

“It’s okay.  Let’s take off the one around your waist and then you can take off one of the others.”

Once the bra situation was resolved she relished my putting itch lotion on her back, shoulders, and front area.  I get bouts of itching as well, so I know how maddening it must be for her.  If I have an episode, I take a Zyrtec.  Twenty minutes later, no itching.  The director of nursing has put in a request to Mom’s doctor to allow Zyrtec.  If we get approval, I hope that helps her.

Pretty Well Settled In and Helping the New Guy

Mom and her neighbors all have times when they want to “go home.”  There are times of agitation, sadness, confusion and anger.  With the help of staff, everyone weathers through those times and I’m sure the care taking and dining staff have plenty of tales to tell when they get home.  Since I visit before noon each day, I don’t experience Mom during her sun downing or more difficult times.

But all in all, at least when I am with Mom, she seems pretty well settled in.  She recognizes neighbors and staff and feels badly that she can’t remember their names.  She may need reminders about where her room is…or that she did have breakfast…or that she needs to brush her teeth and put on itch cream, but overall she is adjusting.

Getting her hair done by Nancy: 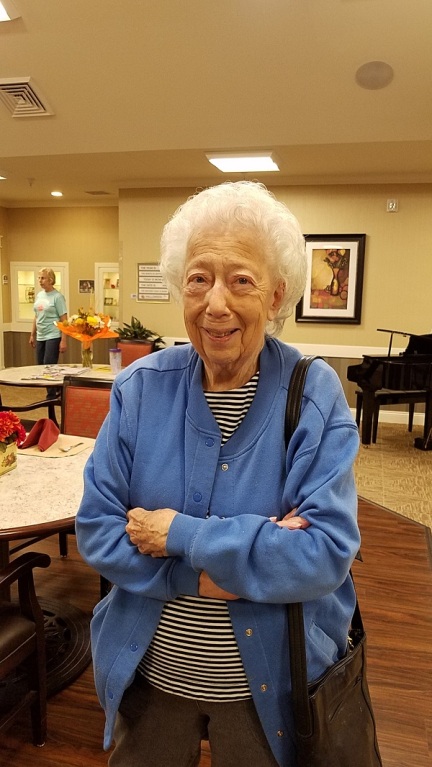 Recently a new resident moved in.  After about two weeks, he realized that he was not going back to where his wife lived…and he was upset.  I was told that Mom heard him and came over to talk to him.  She told him she didn’t like being here at first and has days when she is restless and angry, but now she knows this is the best option and people here are nice, etc.  I didn’t hear what she said, but I was so pleased to learn that she made an effort to approach someone new and comfort him.  It doesn’t matter that maybe two hours later she was complaining and insisted on going back to Grayslake.  She had compassion and clarity for a time and wanted to help someone who was going through what she had gone through.  What a sweetheart.

Last Saturday was the family and friends Thanksgiving dinner.  My taste buds were eager for that visit, but when I arrived I found Mom wincing in pain in her room.  She could barely move.  After being examined by the director of nursing, it was agreed that Mom should be seen.  Staff helped me get her in the car and when we got to the ER we lucked out.  No one was waiting.  (I had visions of us being there for 6 to 8 hours and missing the Thanksgiving feast.) 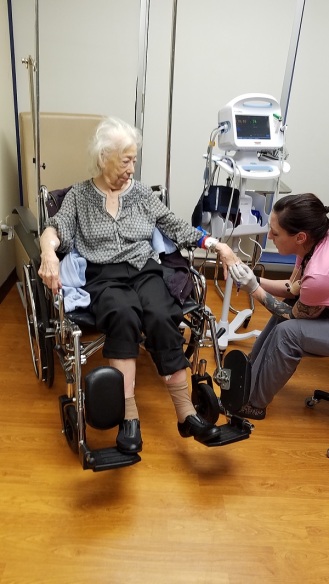 Of course, as soon as Mom was situated in a room she felt “fine.”  The resident doctor did an intake and an examination.  Then the experienced head doctor took a look/feel.  X-rays were ordered and we were told that she has a cracked rib.    Tylenol, walk around, and practice coughing.

How did she get a cracked rib?  No falls were witnessed by staff and Mom, of course, swears that she never fell and never bumped into anything.  I remember the ER nurse saying this would take time to heal, but that it was much better than a broken hip or a concussion.   Mom’s eyes were wide as saucers when she heard that.  She was helped into the car and we got back to The Arbors At Mill Creek Village  in time to enjoy a nice Thanksgiving dinner.

When I do her nails, she sees cotton balls and thinks they are eggs.  But she loves the end result.  We go for a subtle look: 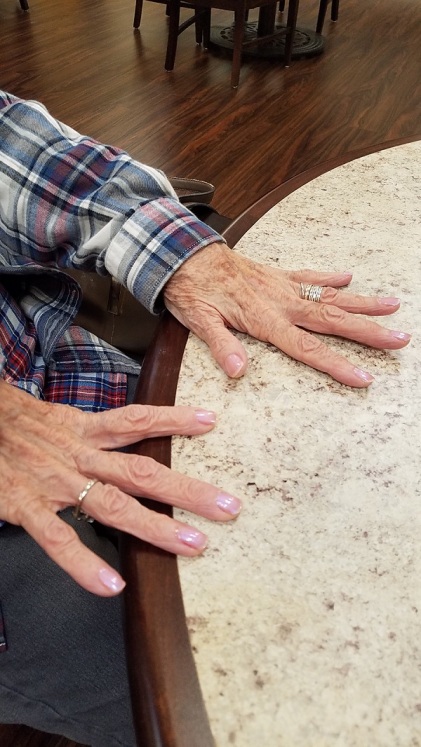 She will have days of crying and sadness; then things change and she acts content and glad to be where she is because “the people are nice and they keep it clean here.”

She can engage in lively kidding and jokes during coffee/chat times…sympathize with others if they are upset.

I’m seeing a “lost” look on her at times.  I know things will only continue to decline, so I am grateful for every visit we have where she and I can chat and laugh with our friends at The Arbors.

When Mom looks sort of lost:

Putting on pants backwards is another fashion trend she has.  I mention it to her and ask if she’d like to turn them around.  If not, okay.  She always chooses to put them on the right way and will again say, “I don’t know why I do that.”

She seems pickier about food.  She’ll wrinkle her nose when I read her the lunch menu…even if it’s something she has always enjoyed.

I do believe that on some level she understands that it is good for both of us to live in the same city.

So we have our routine now and Mon is glad to see me when I visit.  Unfortunately, after I leave she sometimes thinks it’s been days or weeks since she last saw me.

Mom often tells me how wonderful it is that I have many friends and that I should enjoy myself.  She has always just wanted me to be happy and to be in relatively good health.  So far, so good, Mom.

Just another voice in the wilderness from someone who's lived on this planet for over 70 years and faces permanent residency on Planet Elderly. Update: As of March 2, 2017, I turned 70. I'm now an official resident of Planet Elderly. Dad passed away September 22, 2016. In late March 2017 I was able to move Mom closer to me where she resided at a memory care assisted living community until being downsized to a skilled nursing senior community in October 2018 in Columbia, Missouri. I view the Parental Journal entries as part therapy, part family history, sort of a case study of our family's journey with dementia. It's quite an adventure. Recommended readings for others who have loved ones who live with some form of dementia: The 36-Hour Day; the website: https://www.agingcare.com/ ; https://www.alz.org/
View all posts by jjmummert →
This entry was posted in Parental Journal, Uncategorized and tagged dementia, elderly parents, memory care, memory loss, planet elderly, Thanksgiving dinner. Bookmark the permalink.